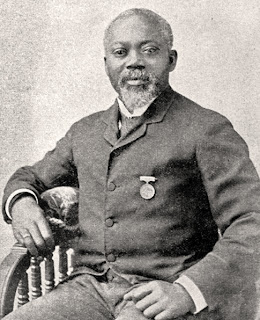 His father, also named William, was either freed by his master or escaped to the north via the Underground Railroad,

The family settled in New Bedford, Massachusetts.  Young William learned to read and write, and by age 15 he was planning to become a minister.

He was 21 years old when the Civil War began.
William enlisted with the Massachusetts Regiment in 1863, soon after the Union Army began recruited black men.  William said he met a white man named Carney, who gave him his last name so he could enlist.

Carney served with the 54th Massachusetts Volunteer Infantry, the first colored regiment in the North, as a sergeant.  He told the Liberator newspaper:


Previous to the formation of colored troops, I had a strong inclination to prepare myself for the ministry; but when the country called for all persons, I could best serve my God serving my country and my oppressed brothers.

He took part in the July 18, 1863, assault on Fort Wagner in Charleston, South Carolina. Fort Wagner on Morris Island guarded the entrance to the harbor of Charleston. The regiment's commander, Roger Gould Shaw, and the 600 men of the 54th Massachusetts would spearhead the Federal assault from a slim strip of sand on the east side of the fort, which faced the Atlantic Ocean. Federal land and sea artillery bombarded the fort all day long. By nightfall, orders were passed down and the 54th stood up, dressed ranks and attacked in two wings of five companies each.

Carney eventually received the Medal Of Honor for saving the American flag and planting it on the parapet despite being wounded  in the head, leg and hip. Recognizing the troops had to retreat under fire, Carney struggled back across the battlefield. He eventually made his way back to the Union lines, and turned over the colors to another survivor of the 54th, modestly saying "Boys, I only did my duty; the old flag never touched the ground!

The 54th suffered 272 killed, wounded or missing out of the 600 in the battle. Colonel Shaw was among the dead. Total Union casualties were 1,515 out of about 5,000 in the assault force, while the Confederates had 174 casualties out of about 1,800 defenders.

Although the Union forces were repulsed and had to lay siege to Fort Wagner, which the Confederates abandoned two months later, the 54th was widely hailed for its bravery.  The regiment's heroism had a ripple effect, spurring thousands of other black men to join the Union Army. Edward Hallowell, Carney's commanding officer after Shaw's death, specifically mentioned Carney's courage under fire in his report on the assault,  .
Because of his injuries, Carney was discharged from the Army on June 30, 1864, a little more than a year after the battle,. Carney subsequently married Susannah Williams, also of New Bedford, on October 11, 1865. They had one child who later became an accomplished music teacher in New Bedford.

In 1866 William Carney was appointed superintendent of streetlights for the city of New Bedford. He then went to California to seek his fortune but returned to New Bedford in 1869 and took a job as a letter carrier for the Postal Service. He worked at that job for 32 years before retiring.

On May 31, 1897, Carney carried the colors in a procession by the monument to Robert Gould Shaw and the 54th on the Boston Common.

Carney was awarded the Medal of Honor May 23, 1900, nearly 37 years later. More than half such awards from the Civil War were presented 20 or more years after the fact.  His actions at Fort Wagner preceded those of any other black recipient. He was the 21st African-American to be awarded the Medal, the first recipient having been Robert Blake, in 1864.

After retirement he was employed as a messenger at the Massachusetts State House, where in 1908 he would be fatally injured in an accident that trapped his leg in an elevator.  He died on December 8, 1908 at the age of 68. In December 1908, all the flags in the Commonwealth of Massachusetts were lowered to half-mast in tribute to Sgt. William H. Carney. Never before had this honor been paid to an ordinary citizen and African American.

He was  buried in the family plot at Oak Grove Cemetery in New Bedford.  Engraved on his stone monument is a gold image of the Medal of Honor.