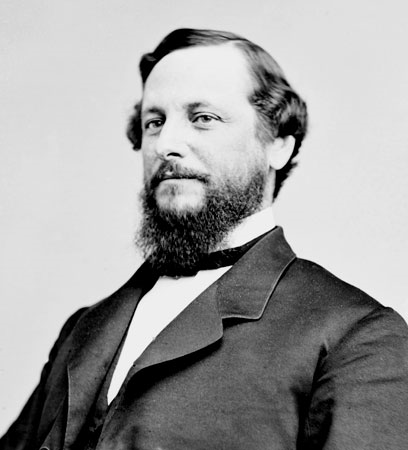 George Hunt Pendleton was born in Cincinnati, Ohio, the fourth of seven children in the wealthy and prominent family of Nathanael Greene Pendleton.  Nathanael Pendleton served in the War of 1812 and was one of Ohio's representatives in the United States Congress.

George attended local schools in Cincinnati, including Woodward High School.  He then studied with Professor Ormsby Mitchel, until transferring to Cincinnati College.


George and his younger brother Elliott spent two years travelling through Europe, Asia and Africa. He studied a for while at the University of Heidelberg in Germany.

Known for his handsome looks and dashing clothing, he was often referred to as "Gentleman George" throughout his life.

He was 36 years old when the Civil War began.


Pendleton studied law and was admitted to the bar in 1847. He began his practice in Cincinnati.


He was a member of the Ohio Senate from 1854 to 1856. In 1857 he was elected as a Democrat to the United States Congress, and was re-elected to the three following Congresses.


During his tenure, Pendleton served on the House Judiciary Committee and on the Ways and Means Committee. Pendleton opposed measures to ban slavery in the West during the 1850s.

In 1859, Congressman Daniel Sickles shot and killed Phillip Barton Key, brother of Alice Key Pendleton,  for having conducted a public affair with his wife, Teresa Bagioli Sickles.  Sickles saw Key sitting on a bench outside the Sickles home in Washington, D.C. on February 27, 1859, signalling to Teresa, and confronted him.  Sickles rushed outside into Lafayette Square, cried "Key, you scoundrel, you have dishonored my home; you must die", and with a pistol repeatedly shot the unarmed Key. At the time of his death, Key was the United States Attorney for the District of Columbia.

Sickles was acquitted on the basis of temporary insanity, a crime of passion, in one of the most controversial trials of the 19th century.  It was the first successful use of the defense in the United States.  Sickles' attorney, Edwin Stanton, later became the Secretary of War.  Newspapers declared Sickles a hero for "saving" women from Key.

During the secession crisis, Pendleton called for union through peaceful compromise. Short of that, he preferred a peaceful splitting of the Union based on Southern states' rights to federal force maintaining the Union.

However, once the Confederates fired on the U.S. flag at Fort Sumter, Pendleton backed using force for defense, but still not to force reunion. During the war, Pendleton was part of the loyal opposition who wanted "the Constitution as it is, the Union as it was."  He was a noted antiwar Democrat. He was a leader of the peace faction of the Democratic party, with close ties to the Copperheads. He was a close associate Clement Vallandigham, Ohio's leading Peace Democrat.

His brother, Elliott, was a member of the Union Civil War Sanitary Commission.

Pendleton voted against the Thirteenth Amendment to the United States Constitution, which outlawed slavery and involuntary servitude.


He ran in the 1864 U.S. presidential election for Vice President, on the Democratic ticket  with George McClellan. 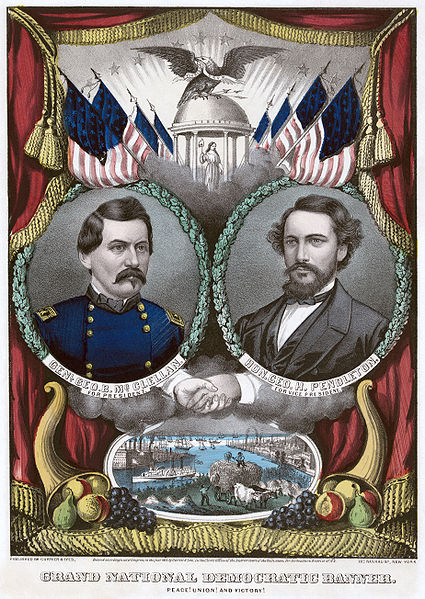 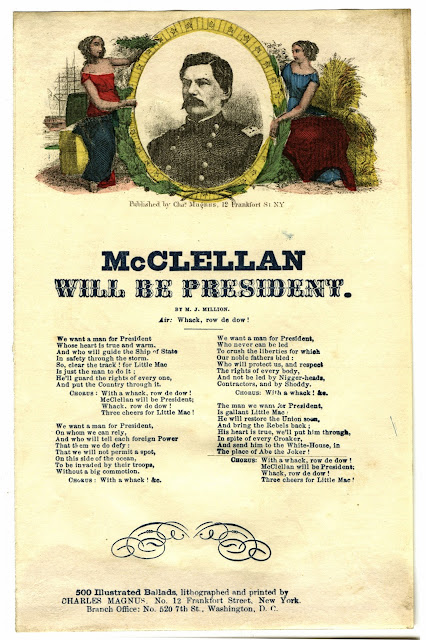 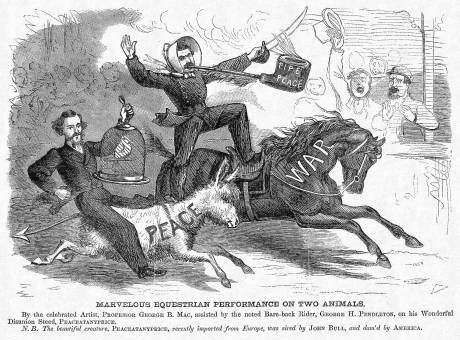 McClellan and Pendleton lost, receiving about 45% of the vote. Pendleton also failed to be re-elected to Congress.

After the war, Pendleton was an outspoken critic of Republican Reconstruction measures. During the Presidential Election of 1868, he was the runner up to Horatio Seymour as the Democratic nominee.  His campaign suffered because of his support for the Greenback movement.  He was an unsuccessful Democratic candidate for governor of Ohio in 1869, losing to Rutherford B. Hayes.

In 1869 he became president of the Kentucky Central Railroad and kept this position until he was elected as a Democrat to the United States Senate in 1879. From 1881 to 1885 he was Chairman of the Democratic Conference. 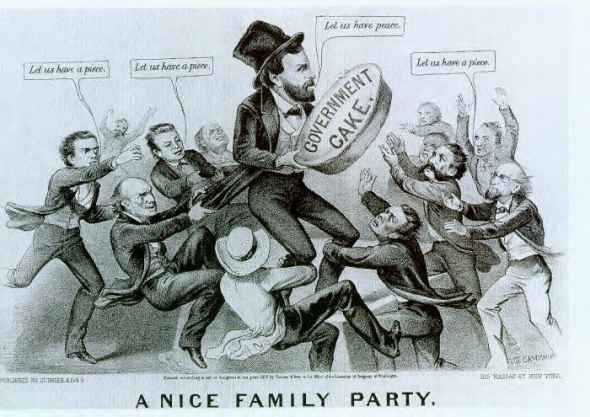 He sponsored the Pendleton Act of 1883, which helped put an end to the system of patronage that was in widespread use at the time. Pendleton favored the replacement of the spoils system with a civil service. Job applicants would have to have at least the minimum qualifications for a position to be appointed to it. On January 16, 1883, President Chester Arthur signed Pendleton's bill into law.  Politics and factors such as religion and nationality were to have no bearing on the hiring of civil servants. Although the act initially covered only about 10 percent of the jobs, subsequent legislation increased the percentage and it grew steadily. 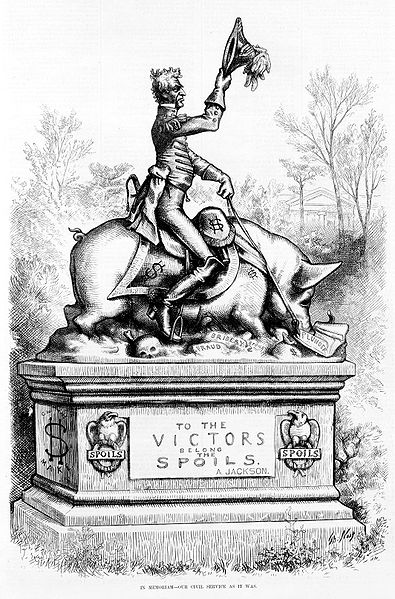 Pendleton suffered for his support of civil service, as many members of his party favored the spoils system. When his term in the United States Senate ended, his party turned on him in 1884 and selected another man to campaign for the Senate seat.

In 1885 he was appointed by President Grover Cleveland to be Envoy Extraordinary and Minister Plenipotentiary to Germany. 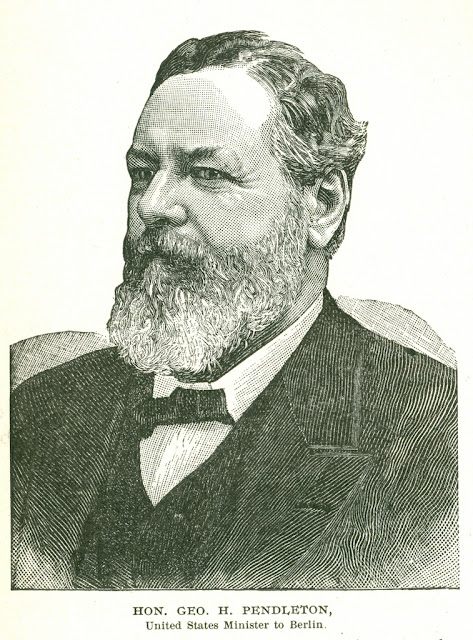 In May 1886, Alice, his wife of 40 years, died in a carriage accident in Central Park, New York City.  She and her daughters had been visiting her son, Frank, who had recently been widowed.  Her daughter, Jane, was also injured in the accident.  Alice Pendelton was 61 years old when she died.


In September 1889, Pendleton was overcome by a debilitating stomach ailment in Brussels, Belgium as he was travelling back to the United States. He was ill in that city for two months, before dying on November 24. He was 64 years old.

He was survived by his three children: Frank Key Pendleton, a lawyer in New York, and his  two daughters, Miss Mary Pendleton and Mrs. Jane Pendleton Brice.

He was buried in Spring Grove Cemetery in Cincinnati.

Pendleton left no memoirs, diaries, or journals, and whatever personal papers survived him were destroyed in a house fire in 1926. 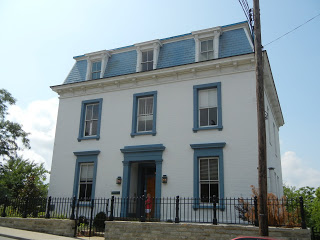 The Senator George H. Pendleton House, located at 559 Liberty Hill in Cincinnati, is a National Historical Landmark, and was listed on the National Register of Historic Places in 1966. Pendleton built the house in 1879; he and his committee met there in 1882 to draft the Pendleton Act.